What is Nonviolent Challenge ?

Nonviolent Challenge is a scenario (mod) for Civilization V developed in group during my second year serious game* class. My comrades and me were asked to develop a game project promoting nonviolence in association with the non-profit organization « Non-violence XXI ». 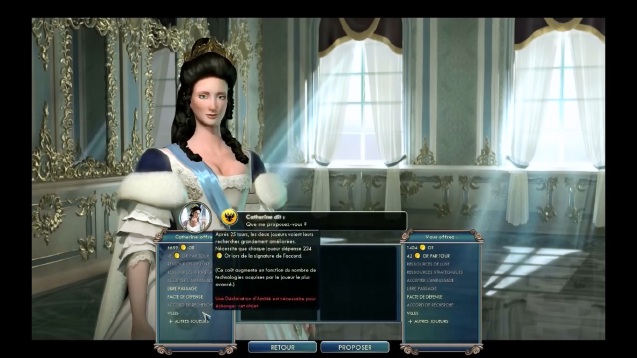 In this scenario, the player embody Gandhi, the leader of the Indian empire, in a world divided between three main powers, the Indians,  the Russians led by Catherine and the Japaneses led by Oda Nobunaga. While Gandhi have strong bonds with city-states but a really weak military, his neighbor Catherine is really turned toward war and conquest. Since she as a stronger army, the player must slow Catherine’s conquest and protect the city-states avoiding to get a frontal fight with her, in order to win a nonviolent victory (diplomacy, scientific, cultural).

We constructed this mod such as each these 3 victory brings a different experience and difficulty. Furthermore, each situation can be solve by many ways, providing the player a great freedom of choice.

On this project we were 5 game designers. Dante Medina and I took care of management, level building and moding. Caroline Bitterly, Thomas Verdier and Galderic Sabourin were in charge of creating the playtest protocol, organizing the playtests and processing the data gathered.

The Nonviolent Challenge project arrived finalist at the E-Virtuoses Awards 2013 in the serious gaming** category. The scenario have also been exhibited at the serious game event Gala organized by Dassault System in October.

* A serious game is defined as a game providing a message or serving educational and learning purpose.

** Serious gaming is defined as the fact of using a game and diverting it from his main function in order to transmit a message or serve educational and learning purposes.